There was a moment of great uncertainty in my life, when geopolitical upheavals seemed to disrupt the social fabric of my personal life in ways I struggled to understand at the time, and that in many ways I have been grappling with – through my art and through my wanderings, through my activism and through my relationships, ever since.

It was during the early years of the new millennium, the beginning of the war on terror. I was in my early twenties and had grown up a second generation immigrant in Britain during the 1980s and early 1990s, subject to the racism that is part and parcel of this country’s cultural landscape and negotiating my identity in and around that.

Then, towards the end of the 90s, something strange seemed to happen within that landscape, perhaps connected with the election of the New Labour government – a kind of positive embrace of the British multiculturalism that I myself identified with and that I could see now reflected in sporting heroes, prize-winning authors and musicians, cutting edge TV dramas, gallery art and independent film. It was the time in my life, when I too was coming of age and stepping into the citadel of educational privilege. Carried by the waves of that cultural shift, I set out on this journey in a mood of great confidence and optimism about what the future had in store.

The change didn’t happen with the same explosive immediacy that saw the twin towers collapse in September 2001. Perhaps it moved out in ripples from that event though as the infrastructure around us began to change. The airline barrier, passport control, new laws that seemed to dismantle mechanisms of due process and age-old principles of liberty. A new belligerence in the language of international relations. An axis of evil.

Perhaps it all felt quite distant at first, academic even from the viewpoint of an undergraduate kid mainly focused on getting laid and getting high, but then there was too, this constant reminder, every time I tried to board a plane, in fact every time I turned on the television, that while “terror” was the explicit target of this new era of control, race-lines were being drawn and re-drawn in the name of “counter-terror” all around us.

There was a kind of panic in my response – a shock realisation, still too fragile to articulate, that everything I had taken on as “my identity” was unstable – that to be an immigrant in someone else’s landscape was to live, for good or for bad, through another person’s gaze.

I would turn to friends to try to shore up what I was frightened to be losing, but rarely would I find the recognition and shared identity that I was looking for. Instead, I would discover, time and again, that I was speaking across the threshold of otherness. I would put on a brave face but in my heart, I was seeking out new horizons, new relationships, a deeper history and a wider world that could restore to sense all that now felt so confused.

Cut to 2020. In this year of global pandemic, where so many of us find ourselves now grappling with stories of personal and societal upheaval, I find myself looking back to that younger self, wondering what I learnt from this experience of shattering uncertainty. Once cleft apart, how do we put our worlds back together again?

Back then, driven by this yearning for more world, more insight, greater consciousness, I stepped away from a life that made no sense to me anymore and became a traveller, seeking the clues that lay beyond the edges of “my identity”. I uncovered histories of empires and migrations. I found context and frame for the dynamics of my formative years. I experienced solidarity with other people of colour, all the way from Whitechapel, East London to Geylang, Singapore, grasping how inequalities that had become newly apparent to me were in fact part of a global structure of racism and that there was a place of belonging for my yearning and this striving within a worldwide anti-colonial tradition.

I started to see, above all, how my own experience of uncertainty had been like a clarion call, inviting me to relinquish illusions – of national belonging in the face of racist inequality – and instead to ground my sense of self in what lay beyond, a kind of planetary humanism where the nation itself was no be-all and end-all as perhaps I had once believed it to be, but rather a piece of the puzzle – a bit part player within the wider cosmic landscape of belonging. These days, I ask myself again what is the edge of our identity, of our being and belonging, that this new era of crisis is inviting us to see and see beyond.

The poet Keats once described a quality that he called “negative capability” – “when a man is capable of being in uncertainties, mysteries, doubts, without any irritable reaching after fact and reason”. He thought this quality was the essential space of our creative identities – the crucible of poetic vision. As we emerge now into these new times of collective uncertainty, it’s an idea worth holding close that only as we relinquish what we think we know, about ourselves and the world that contains us, do we ever really see what is and more of who we are. 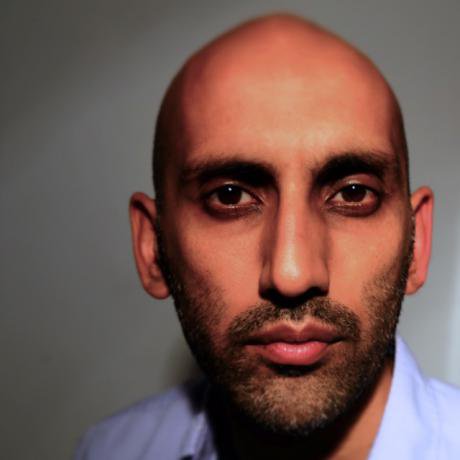 Ashish Ghadiali is a writer, filmmaker and activist based in Dartington, South-West England. Current film and TV projects include a short film, The White Days, currently in development with BBC Films and DMC Film, about racial violence in the East End of London in the late 1970s and a series pilot, Kingdom Come, in development with BBC Studios, about the Jacobite Rebellion in 1740s Britain. Previous film credits (as director) include the feature documentary, The Confession (2016), for the BFI and BBC Storyville and distributed by Dogwoof Films and Picturehouse Cinemas, which explored narratives of the War on Terror through the lens of former Guantanamo detainee, Moazzam Begg. A member of the climate justice collective, Wretched of the Earth, Ashish is also a representative for the Political Strategy working group of the COP26 civil society coalition and convenor of the Climate Justice Network. Previous roles include Race Editor then Co-Editor of Red Pepper Magazine (2017-2020), and Founding Director of the Freedom Theatre Film Unit (2012-3) in Jenin Refugee Camp, Palestine.

Be part of the discussion

‘Beyond the Now’ is a syndicated social practice platform, founded by partners based and working in locations across the globe, which aims to open up new creative, cultural and political affinities for a post-pandemic world.

This website uses cookies to improve your experience while you navigate through the website. Out of these, the cookies that are categorized as necessary are stored on your browser as they are essential for the working of basic functionalities of the website. We also use third-party cookies that help us analyze and understand how you use this website. These cookies will be stored in your browser only with your consent. You also have the option to opt-out of these cookies. But opting out of some of these cookies may affect your browsing experience.
Necessary Always Enabled

Any cookies that may not be particularly necessary for the website to function and is used specifically to collect user personal data via analytics, ads, other embedded contents are termed as non-necessary cookies. It is mandatory to procure user consent prior to running these cookies on your website.

Important Please Read: Whilst Text and URL's will be recalled images will need to be uploaded again.

‘Beyond the Now’ aims for an accessible written style. It is not an academic journal and the written contributions may include first person accounts and reflections.

Contributions should be approximately 500-1000 words in length.

Where the content of the submission involves theoretical or other specialist content, please aim as much as possible for exposition that will be accessible to a general reader (i.e. across academic disciplines and to non-academics).

Referencing should be included in the MLA format: MLA Citation Guide

References to webpages may be included as hyperlinks.

Please clearly indicate the title of the submission and provide, if possible, an image to accompany it with required acknowledgement / permission for use.

Please provide a title for the piece and a short (50 word) outline of content for publication.

If possible, please provide a still from the video for use on the ‘Beyond the Now’ site.

The Bio should be 100-150 words long to ensure a standard appearance across the site  (100 words minimum and 150 words maximum).

Please capitalise each of the main words of the title. Avoid using capitals throughout. (e.g. ‘Beyond the Now’ is good. Not ‘BEYOND THE NOW’ or ‘Beyond the now’ unless there is a compelling reason)

Subtitles must be consistent across the publication. Please do not underline subtitles.

Please use single spacing throughout. Do not include text in bold (except for subtitles).
Where the content of the submission involves theoretical or other specialist content, please aim as much as possible for exposition that will be accessible to a general reader (i.e. across academic disciplines and to non-academics).

Please follow this format when including captions for images. Not every image will need all of these entries. Select those that are required and use the order indicated: Alternatively, for images that are not artworks: